Taking action for people in need

GEFRO has been supporting humedica e.V.’s  international  aid work since 2011

„What you want to ignite in others must first burn in yourself!“ Augustine of Hippo, arguably the most important philosopher on the threshold between Antiquity and the Middle Ages, put it in a nutshell with his quote: passion and conviction are important keys on the path to a successful, a happy life. 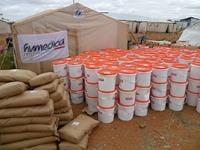 Two parties who possess this burning passion teamed up many years ago to fight poverty and hunger together, and to help people in need. GEFRO’s targeted support of humedica e.V., an internationally operating non-governmental organisation based in Kaufbeuren, in the South of Germany, has been a blessing. For the donating company, that is located close to humedica e.V., their commitment goes without saying and is motivated by the company’s culture of putting people first.

GEFRO owner and managing director has followed humedica’s activities for a long time, the tangible cooperation started in 2011: a famine catastrophe of dramatic dimensions occurred in the Horn of Africa, affecting approximately 12 million people from six countries. From August of that year to January 2012, GEFRO supported humedica’s aid work in Kenya and Ethiopia with generous material donations, including various soups and skimmed milk powder. Naturally, the tolerance, flavor and usability of the products in the affected regions were tested beforehand. “GEFROs practical support was a great help for our aid work in the region” remembers Wolfgang Groß, co-founder and managing director of humedica. “The soups were not only very tasty, they were very easy to transport and extremely practical to use.”

Another mile stone in this couples joint history was the support received for humedica’s aid work after a severe flood in Thailand in 2012. Once again, GEFRO significantly contributed to helping by donating potato soup. The delivery of nutritious food in particular, is the perfect addition to humedica’s aid work with voluntary medical teams. Spectacularly, humedica was also able to help in North Korea, thanks also to the generous supply of food from GEFRO. One of the last communist dictatorships in the world, who, thanks to its particular interpretation of a one-person leadership for the country, in the form of Kim Jong-un, is continuously in the headlines. Although the supply situation is more relaxed than in days gone by, for the majority of citizens, daily life is still very harsh. Not only is a comprehensive supply of nutritious foods often absent, but in many ways infrastructure is lacking too, for example the equipment of medical facilities.

With the help of targeted deliveries, humedica has been contributing to relaxing the situation of thousands of North Koreans since 1998. In July 2014, 10 pallets of GEFRO Potato Soup, helping up to 440,000 people was surely a highlight of GEFRO and humedica’s co-operation that, in the eyes of Wolfgang Groß, humedica’s founder, can gladly continue: “Both companies are very devoted to home, we share similar values and passion for what we do; it would be nice to continue this communal path in the coming years.” 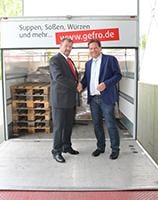 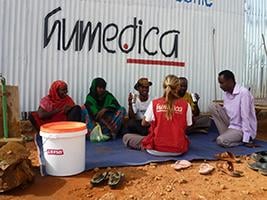 The entire value of the material donations that GEFRO has made since 2011 is €138,786.55 - a remarkable testimony to grace of charity. 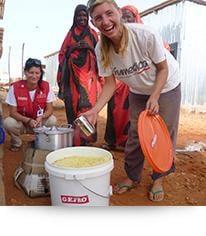 GEFRO has been supporting humedica e.V.’s  international  aid work since 2011

GEFRO’s targeted support of humedica e.V., an internationally operating non-governmental organisation based in Kaufbeuren, in the South of Germany, has been a blessing. For the donating company, that is located close to humedica e.V., their commitment goes without saying and is motivated by the company’s culture of putting people first.