In Bologna, Italy, Bolognese sauce is traditionally served with tagliatelle or green lasagne. Called ‘sugo al ragu’ by the Italians, we know this sauce to be the classical pasta sauce served with spaghetti and other pasta. With our vegan bolognese sauce, we succeeded in creating a tasty sauce sensation: instead of using meat, we use soya granules. But you won’t taste the difference! Veganism is flourishing for many reasons – environmental aspects, health aspects and animal welfare aspects all playing a role in the growth of this trend.

In order to produce our vegan sauce we followed the trend of using soya granules – the result of which is a truly amazing tasting sauce! With GEFRO’s Sauce Bolognese, a traditional tomato meat sauce can be made using just plant-based products and absolutely no meat – but, of course, with the rich and hearty flavour of a conventional minced meat sauce. There are no bounds to your culinary ideas! Try it out, you’ll love it! 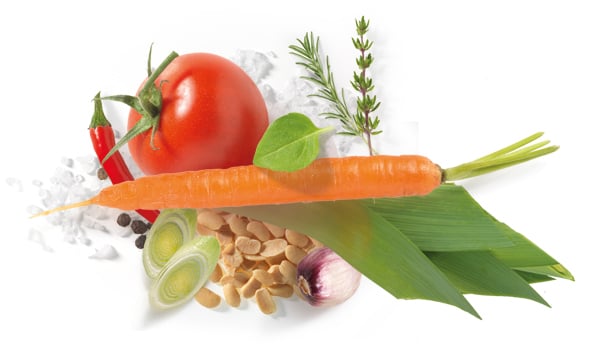 *) GEFRO requests guarantee from its suppliers that the supplied palm oil originates from sustainable agriculture. Corresponding certificates must be submitted.

Soya – the meat alternative for vegetarians and vegans

The discovery that when crushed soya beans (i.e. soya granules) are soaked, they can be used just like minced meat, hasn’t just opened up a world of tasty treats for vegetarians or vegans only. With its remarkably delicious taste and its nutritional benefits, the vegetable-based, protein-rich meat substitute also convinces and conquers everyone who likes to eat meat every now and then too.

Soya – the “meat” of vegetarian/vegan cooking. Soya beans, which contain lots of oil and are rich in protein, originally come from North China, Japan and Korea. Throughout the centuries this protein-rich legume gained in popularity in Europe, especially however, in the past few decades. The protein-rich food has especially caught on in vegetarian and vegan cuisine. Cheese-like tofu made from soybean curd, versatile bean sprouts, condiment pastes such as miso or even commonly known soya sauce have long been an integral part of vegetarian cooking.

You’ll never want to prepare traditional ‘spaghetti bolognese’ using another sauce than with the vegan, soya-based GEFRO Sauce Bolognese. This extremely good sauce is ready to serve with little work but lots of taste: add 4 tablespoons of powder to 1/4 litre of water, whisk, bring to a boil and let it simmer approx. two to three minutes – and you’re done!

TIP: for genuine Italian indulgence, mix the delicious bolognese sauce with the hot pasta before serving.